Evnin Lecture Series: Calling BS: The Art of Skepticism in a Data-Driven World

Join us virtually for the Evnin Lecture with Jevin West and Carl Bergstrom of the University of Washington, co-authors of Calling Bullshit: The Art of Skepticism in a Digital World.

The spread of misinformation is among the most pressing challenges of our time. New platforms for human interaction and information sharing have opened the door to misinformation, disinformation and other forms of networked manipulation, which not only mislead and create divisions, but also diminish trust in democratic institutions such as science.

In this talk, Jevin West and Carl Bergstrom will provide a set of tools to cut through the most intimidating data. You don’t need technical expertise to call out problems with data and information online. Are the numbers or results too good or too dramatic to be true? Is the claim comparing like with like? Is it confirming your personal bias? Drawing on a deep well of expertise in data science, Dr. West and Dr. Bergstrom will provide examples of selection bias and muddled data visualization, distinguish between correlation and causation, and examine the susceptibility of science to modern misinformation. 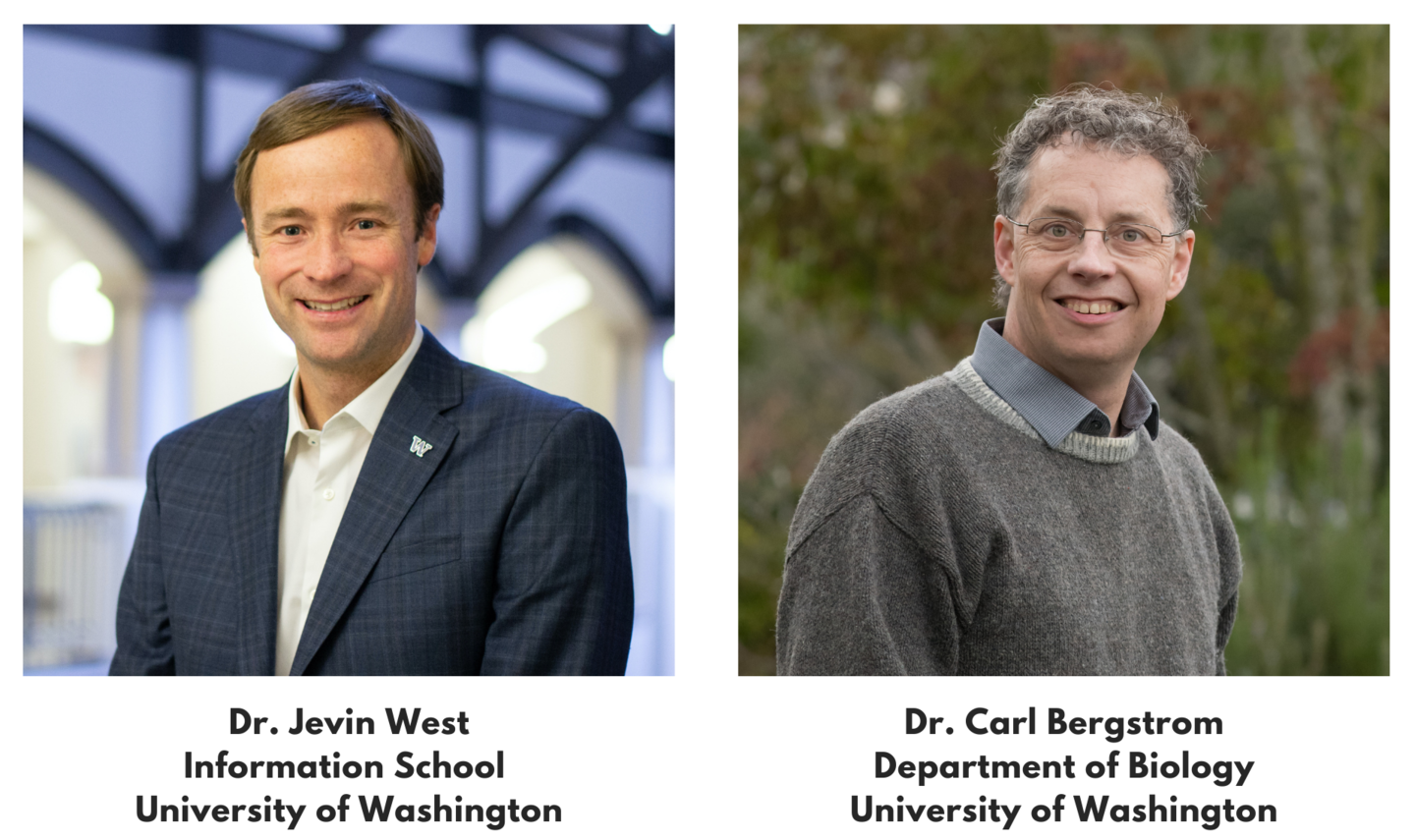 Jevin West is an Associate Professor in the Information School at the University of Washington. He is the Director of the new Center for an Informed Public at UW—a cross-disciplinary, non-partisan effort funded by the Knight Foundation and aimed at resisting strategic misinformation, promoting an informed society and strengthening democratic discourse. He is also the co-founder of the DataLab at UW, a Data Science Fellow at the eScience Institute, and Affiliate Faculty for the Center for Statistics & Social Sciences. His research and teaching focus on the impact of technology on science and society, with a focus on slowing the spread of misinformation. He is also a co-author of the new book, Calling Bullshit: The Art of Skepticism in a Data-Driven World.

Carl Bergstrom is a Professor in the Department of Biology at the University of Washington. Though trained in evolutionary biology and mathematical population genetics at Harvard and Stanford, Carl is perhaps best known for his ability to cross field boundaries and integrate ideas across the span of the natural and social sciences. Since 2010, he has published peer-reviewed manuscripts in areas including ecology, epidemiology, evolutionary biology, computer science, control theory, economics, education, gender studies, informatics, library science, medicine, paleontology, philosophy of science, physics, public health, and sociology. Carl is the author of the leading college textbook Evolution and the new trade book, Calling Bullshit: The Art of Skepticism in a Data-Driven World.

More information can be found here.